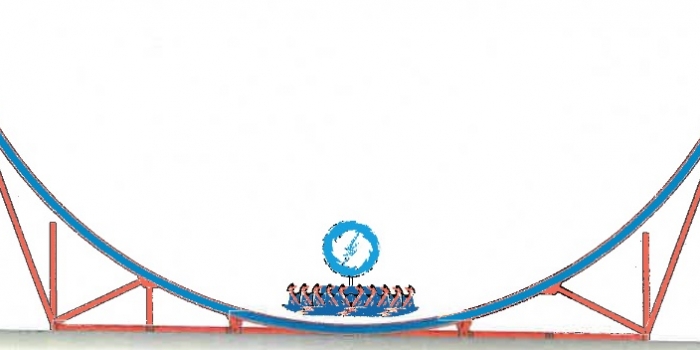 The Santa Cruz Beach Boardwalk has submitted plans to the city to add two new rides for its main entrance project, which is currently under construction.

Known as “Shockwave” and “Typhoon,” the rides stand at 65 feet tall and 60 feet tall, respectively, taller than the allowed 40-foot height restriction. The Santa Cruz Planning Commission will consider on Thursday allowing the Boardwalk to construct the rides.

Known as a “Mega Disk’O” model manufactured by Italy-based Zamperla, Shockwave seats 24 riders on circular platform that spins as it makes its way back and forth on a vertical, half-circle track. The ride will be constructed next to Undertow on an expanded “upper deck” area that will extend over a new game and retail building.

A new version of the Boardwalk’s classic Typhoon is in the works.

Longtime Boardwalk fans may be familiar with Typhoon. The park plans to add a new version of the ride that was removed in 2009 to make way for Sea Swings. Typhoon consists of two arms that swing riders in a circular motion. The ride will be located in a plaza area that will be constructed as part of the main entrance project.

Should the plans be approved Thursday, the rides are expected to open in summer 2017, just in time for the completion of the park’s $12 million main entrance project. The project includes an expansive entrance plaza, ticketing windows, attractions and more.

Crews recently demolished a set of buildings between the Speed Bumps ride and Neptune’s Kingdom, which housed Fright Walk, Lazer Maze and a set of games. Fright Walk and Lazer Maze will both undergo a makeover. Fright Walk, a walk-through attraction that was built in 2004, will take place in a new basement space that will be constructed during the project.

A number of rides in the construction area, including Double Shot and Pirate Ship, are currently closed, and are expected to reopen in the spring.

Plans for the two new rides can be found at www.tinyurl.com/htnzc6z. More information on the main entrance plaza is available at www.beachboardwalk.com/new2017.