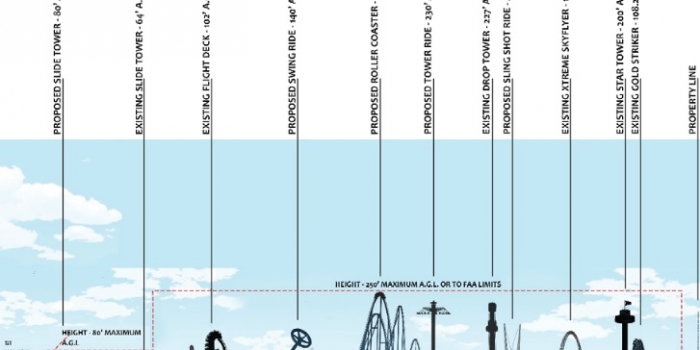 California’s Great America is moving forward with a major project that would add a number of 200-foot-tall rides, an expanded waterpark and a retail destination at the park’s front entrance.

The “Great America Theme Park Master Plan Project,” a 200-page report, is available on the City of Santa Clara’s website. A 45-day public comment period recently wrapped up, and the city’s Planning Commission is set to review the proposal at a public meeting tentatively set for Dec. 19. The Santa Clara City Council could approve the project on Jan. 24.

During a press conference in March, park owner Cedar Fair announced its intentions to rezone the park, a process that would, according to a notice from the city, “continue to allow existing attractions, rides and operating practices and would provide flexibility to allow the development of new rides and replacement of rides and attractions, extension of the operating season, modified operating practices, and additional hours of operation of the Great America theme park and amphitheater.”

An environmental impact report was released in October. The report outlines Cedar Fair’s 20-year vision for the park that would add eight 200-foot-tall rides, 11 rides of 100 to 200 feet, extended hours and a commercial/entertainment destination near the park’s main entrance.

The entertainment district includes the existing Redwood Amphitheater, and “40,000 s.f. of additional theater space currently within Great America would be repurposed,” the report reads, possibly pointing to the revival of the park’s shuttered IMAX theater, which has been closed for more than a decade.

A rendering of the park’s skyline shows a proposed 245-foot roller coaster, in addition to a 230-foot-tall swing ride and an 80-foot-tall water slide tower, among other attractions.