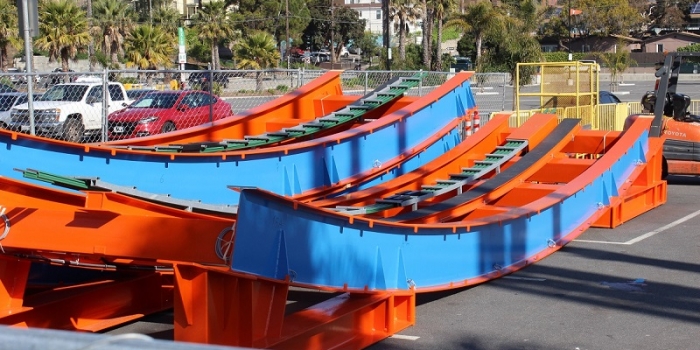 The $14 million project, which broke ground in September, will include two new rides, more ticket windows, a new Fright Walk experience, two arenas for The Vault Lazer Maze and more.

Sitting atop an expanded upper deck next to the Undertow roller coaster is Shockwave, a Mega Disk’O manufactured by Zamperla. The ride holds 24 people, who sit on motorcycle-style seats facing outward around a disc. As the disc spins, the riders will be rocked back and forth on a half-pipe-shaped track.

“It’s a fantastic ride,” said the Boardwalk’s Executive Vice President Tom Canfield. “Being able to put it up on top of the deck, it’s going to give it so much more appeal, so much more thrill, and it’s going to show so much better.”

Workers apply sealant to the surface of the expanded upper deck on April 21. This is where Shockwave will be located. Photo: Erik Chalhoub

Shockwave will stand about the same height as Undertow, and the track will spill over the edge of the upper deck.

Sitting in the center of the entrance plaza is a new version of a classic Boardwalk ride: Typhoon.

Manufactured by A.R.M., Typhoon will swing riders upside-down on two spinning arms, at a height of 60 feet. Unlike the original Typhoon, which was removed in 2009 to make way for Sea Swings, the new version will not enclose riders in a cage, and their legs will be able to swing freely.

Canfield added that the Boardwalk worked with the manufacturer to reconfigure the center seats, so riders will be facing each other.

Pieces of Shockwave have arrived in the Boardwalk’s parking lot. Photo: Erik Chalhoub

While the parts of Shockwave currently sit in the Boardwalk’s parking lot, Typhoon is expected to be delivered in early May.

Fright Walk, Canfield said, will be about “75 percent new,” with more square footage and will take place underneath the Boardwalk. Among the other new additions will be Cruzin’ Crepes, a food stand featuring made-to-order crepes, a birthday party room and two midway games.

Pirate Ship has a new wave façade, and will also sport a reconfigured queue, where riders will load and unload on the same side. Photo: Erik Chalhoub

The Main Entrance project has been about 15 years in the making, according to Canfield. Originally dubbed “Centennial Plaza,” the project was planned to be constructed during the Boardwalk’s centennial year in 2007.

But, as park officials found out, it was a “little ambitious” to get it done in time for 2007, Canfield said.

“We had so many dominoes that needed to fall first,” he said. “That really set the tone as to what we did.”

Infrastructure needed to be upgraded and moved, with some departments moving into the Haunted Castle building in 2010. The parking lot toll booths were upgraded recently with a ticketing system, and the Boardwalk’s dispatch center and switchboard had to be moved, as the buildings that housed those were demolished to make way for the Main Entrance project.

The area is being designed with flexibility in mind. Canfield noted that Typhoon could be moved elsewhere if the park finds something else that is better suited for the area.

A lot of space has been opened up. Typhoon will be located in the center of the plaza. Photo: Erik Chalhoub

With much work still left to go, Canfield is hopeful the area will be up and running on Memorial Day.

“The weather this year threw us behind the eight ball, but these guys are working hard, they’re working two shifts,” he said. “We’re doing what we can to make sure we get everything done.”

Want to experience the Boardwalk’s Main Entrance and all it has to offer for yourself? Consider joining the American Coaster Enthusiasts for our annual Beach Boardwalk Bonanza on June 10.

The details and schedule are still being worked out, but expect activities centered around the new-for-2017 additions (entrance, rides, Fright Walk 2.0, etc.), ERT on the Giant Dipper, a special guest speaker, and a lot more.