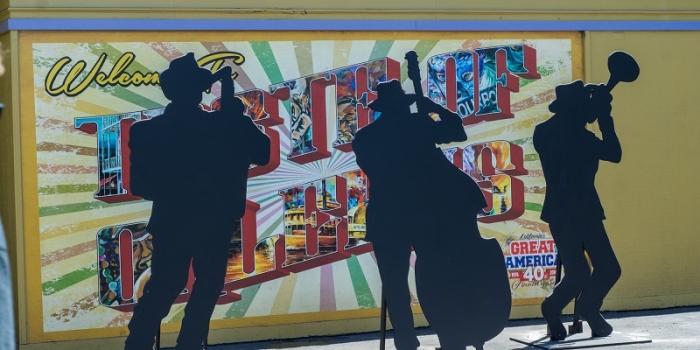 California’s Great America’s Taste of Orleans festival is taking guests on a Cajun experience of food, art and music.

The second annual festival, which is also the park’s second food festival of the year after Red, White and Brews in May, features Cajun cuisine such as crisp frog legs with Creole aioli, craw fish etouffée, chicken and andouille sausage gumbo over rice, hushpuppy shrimp skewers with Cajun dipping sauce, blackened catfish sliders with tangy slaw and a choice of classic beignets or praline bread pudding. The festival takes over the Orleans Place area of Great America.

For anyone who is skeptical of the frog legs, don’t be: they actually do taste like chicken. Smothered in Creole aioli, they are truly a treat. | Photo: Erik Chalhoub

The tender chicken and andouille sausage gumbo over rice dish is almost a full meal in itself. | Photo: Erik Chalhoub

The hushpuppy shrimp skewers resemble a good old-fashioned corn dog, but with shrimp inside the fried batter instead of a hot dog. | Photo: Erik Chalhoub

Prepare to be full, as most of the dishes are served in generous portions.

The Cajun recipes have been given Executive Chef Erick J. Ponce’s twist. Ponce, who is originally from El Paso, Texas, graduated from Scottsdale Culinary Institute in Arizona in 2001.

But food almost wasn’t always going to be his career path. Despite growing up cooking, Ponce was eyeing the Navy after graduating from high school.

One day, his sister asked him to try out culinary school since he had a passion for cooking. One of her friends was already attending culinary school, so after they sent Ponce information about it, he turned in a letter of interest.

“It was the best thing I could have ever done,” he said.

Now a 17-year veteran of the culinary industry, Ponce has experience in casinos, hotels and fine dining establishments. Prior to joining Great America in 2016, Ponce was the chef at San Francisco Zoo.

“What Chef is cooking up here and what he is planning in the coming years is really incredible,” he said as Ponce demonstrated how to cook a catfish slider during a media event held in the Great America Pavilion.

Ponce said he was proud of the work the team does at Great America.

“We take a lot of pride in what we do here at the park,” he said. “We’re trying to elevate the guest experience, not only with our food, but in our attractions as well.”

Chalk artists can be found all over Orleans Place. | Photo: Nicholas Laschkewitsch

A $25 tasting card, plus admission to the park, gives guests access to six different dishes.

Taste of Orleans will return July 29 and 30. For information, visit www.cagreatamerica.com.