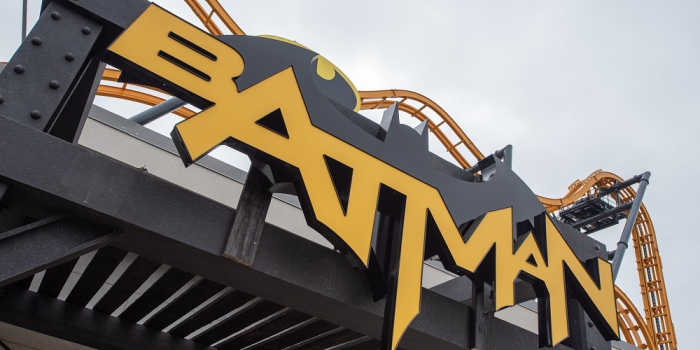 Joker, Harley Quinn and Penguin have terrorized Six Flags Discovery Kingdom for far too long. It’s about time the Caped Crusader has swooped in and put these villains in their place.

Batman: The Ride opened Memorial Day weekend at the Vallejo park, and members of the American Coaster Enthusiasts were invited to try the ride on May 24 before its official debut to the public.

Known as a 4D Free Spin coaster manufactured by S&S Worldwide, Batman stands at 120 feet tall and rocks riders up a 90-degree lift hill. Depending on the weight of the riders, guests can expect to flip at least six times as the train traverses its twisting I-box track frame.

While each seat rotates freely, several sections of the track features magnets that force inversions.

The ride also includes two beyond-90-degree drops that give riders a feeling of weightlessness as they flip their way through the twisted track. Eight riders can fit per vehicle, with a total of five vehicles.

The 4D Free Spin is a popular installment among Six Flags parks, with the first debuting at Six Flags Fiesta Texas in 2015.

During a ribbon-cutting ceremony on May 24, Discovery Kingdom President Don McCoy thanked everyone involved in making the ride a reality, which he said involved a “tremendous amount of planning, collaboration and hard work.”

“Based on one of the world’s most iconic superheroes, Batman: The Ride brings cutting-edge ride technology to the West Coast,” he said. “This is really an exciting day.”

Discovery Kingdom Marketing Director Kirk Smith said the ride was a number of years in the making.

“This is a monumental day for us here at Six Flags,” he said.

He said Batman is the centerpiece of the new DC Universe area of the park. The area had become an unofficial DC-themed land, with The Joker, Wonder Woman: Lasso of Truth and Harley Quinn: Crazy Coaster opening in recent years.

In addition to the morning media debut, Six Flags Discovery Kingdom also hosted a special midnight opening party, and ACE was well-represented at both events.

Mike Rumble said Batman is a great addition to the park’s lineup.

“It’s a very smooth ride,” he said. “It’s got lots of crazy flips, and it’s very different from anything else here in the park.”

“I love this ride,” he said. “As soon as they declared they were building one here, I was just thrilled.”

Noting that the Zipper is his favorite flat ride at traveling fairs, Christensen likened Batman: The Ride as the “coaster version of that flat ride.”

“It just makes me laugh and I get such a thrill out of it,” he said. “You never have the same ride experience from ride to ride. It’s unique in the sense that you’ll always get a different sensation.”

A special thank-you to Six Flags Discovery Kingdom for inviting ACE to the media day. We were thrilled to be one of the first to ride this unique attraction, and look forward to hitting up Batman: The Ride on future visits to the park. Check out a reverse POV at the bottom of the page!