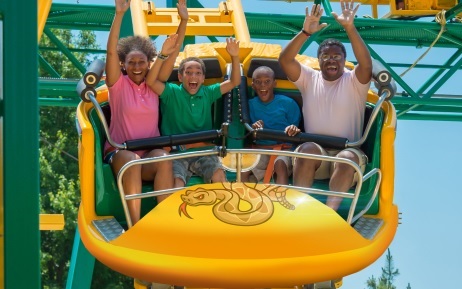 Six Flags Discovery Kingdom has added an impressive number of thrilling coasters and flat rides over the last decade, but its newly announced attraction helps fill a need in its lineup.

Sidewinder Safari will debut in 2020, a spinning wild mouse-type coaster that will feature live rattlesnakes and other reptiles in its queue. The “Twister Coaster” model from Zamperla, measuring in at 1,378 feet of track, is similar to Ragin’ Cajun at Six Flags America.

The family coaster provides a mid-level coaster for younger thrill-seekers, something that the park hasn’t had since Roar was transformed into the Joker in 2016.

“As the world leader in thrills, Six Flags continues to raise the bar to deliver the most unique and innovative experiences in the industry,” Park President Don McCoy stated in a press release. “Sidewinder Safari is unlike any other ride in Northern California, featuring the thrill of a unique, spinning roller coaster combined with an up-close-and-personal reptile encounter for an unparalleled ‘wow’ experience. This is also the park’s 12th coaster, making it the home of the most coasters in Northern California.”

The spinning coaster vehicles sit four riders, who will twist their way through hairpin curves and rapid drops.

While Discovery Kingdom hasn’t shown where the ride will be built, teasers have been spotted at the former home of the park’s elephant attraction.