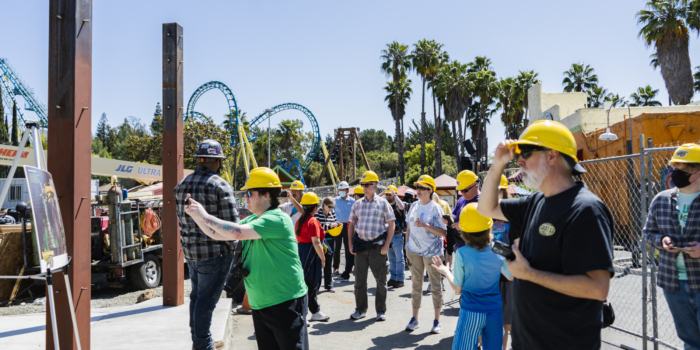 Thanks to ACE member Mitchell Sweet, we take a look back at our first event of the year – a construction tour of the now-open Sidewinder Safari at Six Flags Discovery Kingdom. Thanks to Robert Ingle for the photos featured in this article. A full set can be found on our Facebook page.

On April 9th 2022, Northern California ACE members and their guests were excited to travel to Six Flags Discovery Kingdom for an exclusive tour of the new Sidewinder Safari roller coaster construction site. Being that pandemic restrictions made it difficult for enthusiasts to get out to parks, members were extra excited to be able to attend this first event of 2022.

Located in Vallejo, California, Six Flags Discovery Kingdom is a favorite among park goers not only for its collection of roller coasters, but also its various live animal attractions. For the 2022 season, Discovery Kingdom is introducing the new Sidewinder Safari roller coaster and ACE members got the incredible opportunity to go behind the scenes to see the construction process of the new attraction.

Members look on as the tour of Sidewinder Safari begins. | Photo: Robert Ingle

When members arrived at the construction site Marketing Supervisor Daniela Mereles and Marketing and Public Relations Manager Marc Merino checked them in and gave them an exclusive Sidewinder Safari hard hat that was theirs to take home. The tour began when Ride Maintenance Manager Charles Laureano introduced the new ride by talking about its theme, ride experience, and technical details like its manufacturer and model name. Charles then walked the group around the construction site so everybody could get a closer look at the ride being built. Attendees had the opportunity to see design mockups and 3D models of ride theming elements and the impressive queue building. Additionally, attendees saw actual signage to be used throughout the attraction after its opening.

Signage to be used in the queue for Sidewinder Safari. Note the top sign being an easter egg to Charles Laureano himself. | Photo: Robert Ingle

Charles knew plenty about the construction process of the new ride and was happy to answer various questions from attendees. He explained how a new roller coaster is planned, purchased and built in addition to what special considerations need to be given to a ride being constructed in California. He also mentioned how Sidewinder Safari is the first ride of its kind to have a moving station and an advanced safety PLC.

While members were enjoying the tour, attendees received a surprise visit from an on-brand friend – Michele, an Eastern Indigo Snake! The queue building of the new Sidewinder Safari will feature a live animal exhibit and ACE members got a sneak peek of that too, during which one of the park’s animal trainers explained how the ride’s queue building is being built with special considerations for the live animal’s comfort and safety. Seeing Michele was a great end to an incredible tour that is sure to be remembered by all members who attended.

The construction tour was a fantastic way to welcome everyone back after the pandemic and we would like to thank everyone from the park who was involved in giving the wonderful tour!

For more information on Sidewinder Safari, check out: