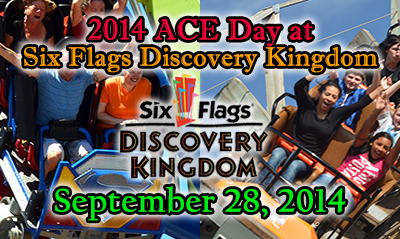 The flier and registration form for our rescheduled ACE Day at Six Flags Discovery Kingdom on Sunday, September 28th is now available here:

In addition to thirty minutes of ERT on Roar and SUPERMAN Ultimate Flight, the package includes admission, parking, barbecue chicken and hot dog picnic, Q&A with park management, a surprise visit, and a souvenir photo taken with the park’s costumed characters or your choice of on-ride photo. This year, a season pass discount is available for this event. Those paying the full price, however, will be eligible to upgrade their event admission to a 2015 Gold Six Flags Season Pass. See the flier for full details.

Registration deadline is September 20th. So register today! PayPal payments also will be accepted for this event’s registration.