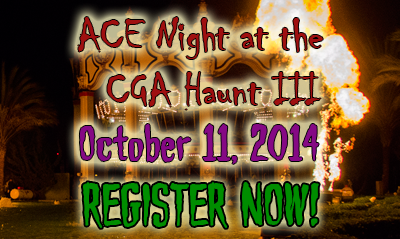 The flier for the October 11th event, ACE Night at the Haunt III at California’s Great America, is now available and registration is open!  The flier is available at the link below and the schedule can also be seen below:

Registration and payments are due by Monday, October 6th, 2014.  So register today!  PayPal payments are accepted for this event.

Video from our 2013 ACE Night at the CGA Haunt: