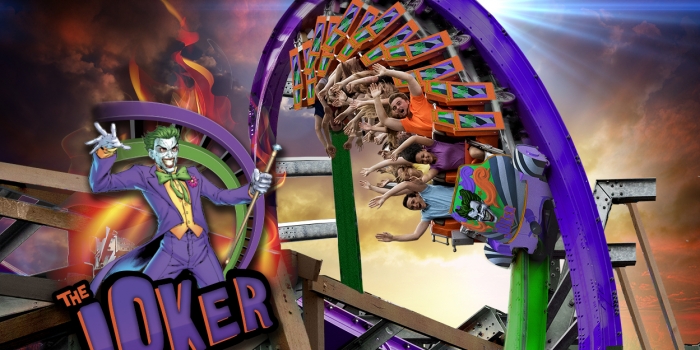 In Spring 2016, Six Flags Discovery Kingdom will open the most-anticipated new roller coaster in northern California in over 10 years, The Joker. This state-of-the-art extreme coaster will be the “must ride” coaster of the season, adding to the park’s status as Northern California’s most thrilling theme park.

“The Joker will be the most talked about new coaster in 2016,” said Don McCoy, park president. We are excited to introduce this innovative technology that marries the best of both classic and modern coaster designs to offer our guests an unparalleled and unique experience.”

The Joker ride is the second DC Comics-themed attraction at the park after SUPERMAN™ Ultimate Flight opened in 2012 and the villainous character’s personality is evident in the coaster’s chaotic twists and turns including a first ever “step-up-under-flip inverted roll” that takes riders horizontal. The Joker ride also features the ultimate “fake-out” with a unique breaking wave turn, the only one of its kind on the West Coast.

Additional highlights of The Joker include:

The Joker ride is being transformed from what was the park’s iconic and traditional wooden coaster Roar which closed on August 16, 2015.  The Joker ride is scheduled to open in Spring 2016. For more information about upcoming 2016 Six Flags rides and attractions, including a video highlighting the new rides, visit www.sixflags.com/2016news.

Six Flags Discovery Kingdom is also announcing the start of 2016 Season Pass sales with its special Flash Sale through Labor Day weekend featuring the best deal of the year – savings up to 65% off on 2016 Passes! September 3 through 7, guests will receive a free upgrade to a Gold Season Pass with every Pass purchased. Gold Season Passes include admission to Six Flags Discovery Kingdom and any other Six Flags theme park, as well as free parking and special admission offers for friends. 2016 Season Passes provide unlimited visits any operating day for the rest of 2015, including park admission to Fright Fest, Holiday in the Park and all of 2016.

About DC Entertainment
DC Entertainment, home to iconic brands DC Comics (Superman, Batman, Green Lantern, Wonder Woman,The Flash), Vertigo (Sandman, Fables) and MAD, is the creative division charged with strategically integrating its content across Warner Bros. Entertainment and Time Warner.  DC Entertainment works in concert with many key Warner Bros. divisions to unleash its stories and characters across all media, including but not limited to film, television, consumer products, home entertainment and interactive games. Publishing thousands of comic books, graphic novels and magazines each year, DC Entertainment is one of the largest English-language publisher of comics in the world.