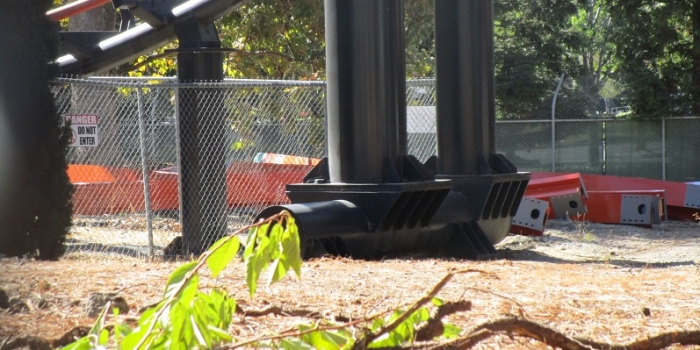 Work has ramped up on RailBlazer’s construction at California’s Great America.

In the past week, heavy equipment has arrived on scene, and crews have drilled holes for foundation work. CGA also received the first shipment of track from Rocky Mountain Construction’s Idaho facility.

An overall look at the construction site as seen from Star Tower on Oct. 21. | Photo: Erik Chalhoub

The curved pieces of track are being stored next to Demon’s loop. This photo was taken from Demon’s line. | Photo: Erik Chalhoub

A number of holes for footers have been drilled. | Photo: Erik Chalhoub

A fence is now blocking off the grassy area next to the construction zone. | Photo: Erik Chalhoub

That wraps up this update. Great America closes for the season on Oct. 29, and will reopen on Nov. 24 for its one-month WinterFest run.