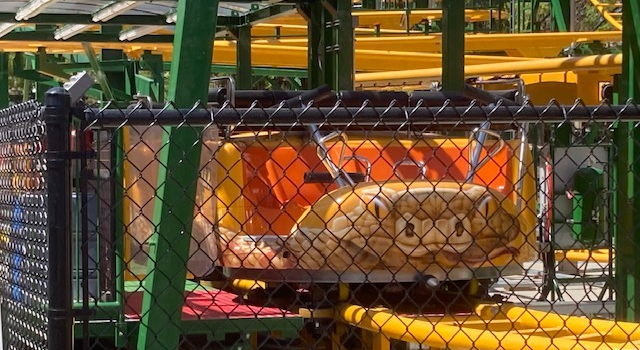 Sidewinder Safari at Six Flags Discovery Kingdom finally has an opening date, three years after it was first announced.

May 28 is the day the Vallejo park will open its reptile-themed spinning wild mouse coaster to the public, it announced recently on social media.

The “Twister Coaster” model from Zamperla, measuring in at 1,378 feet of track at a maximum height of 43 feet, is similar to Ragin’ Cajun at Six Flags America. It takes over the former spot of Discovery Kingdom’s elephant attraction, located near the rear of the park next to Odin’s Temple of the Tiger.

Sidewinder Safari was originally announced in 2019 as a 2020 attraction. But Covid-19 forced Discovery Kingdom to close in 2020, and through the uncertainty of the pandemic, the ride was pushed to 2022.

Crews have been making the finishing touches on Sidewinder Safari and completing test runs in advance of the May 28 opening date. | Photo: Erik Chalhoub

This giant snake will greet visitors to Sidewinder Safari’s queue, which will feature live rattlesnakes inside. | Photo: Erik Chalhoub